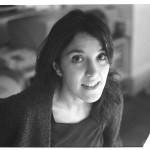 From 2000 to 2011 she worked at the Arata Isozaki office in Barcelona, as architect in concept and design buildings. She participated to several project developed between Barcelona and Tokyo: Distrito 38 master plan and office building in collaboration with Foreign Office (London), Illa de Blanes, Isozaki Atea in Bilbao, Bahns d’Arties Resort Spa, Public Housing Carabanchel 21 in Madrid, Hotel Puerta America in Madrid, National Museum of Egyptian Civilization (NMEC) in Cairo. Beyond architecture, she also collaborated to several publications for the office and she is still maintaining a freelance collaboration for the Social Housing project, Carabanchel 21 in Madrid, now under construction. During her period at AIA office she broadened her interests in intersection between architecture, contemporary culture, territory and current issues in society. In 2008 she began her collaboration with Laura Cantarella, running the research project Topography of Trauma, one of the first activities of Landform. From 2010 she is full time engaged as director of ABADIR Academy (Arts Between Architecture Design & Interdisciplinary Research) in Catania.

SUBSCRIBE FOR UPDATES ON NEWS, COURSES AND UPCOMING EVENTS

Sorry, this entry is only available in Italian.